A few months ago we built a simple Twitter desktop client with oAuth support using C# and .NET. 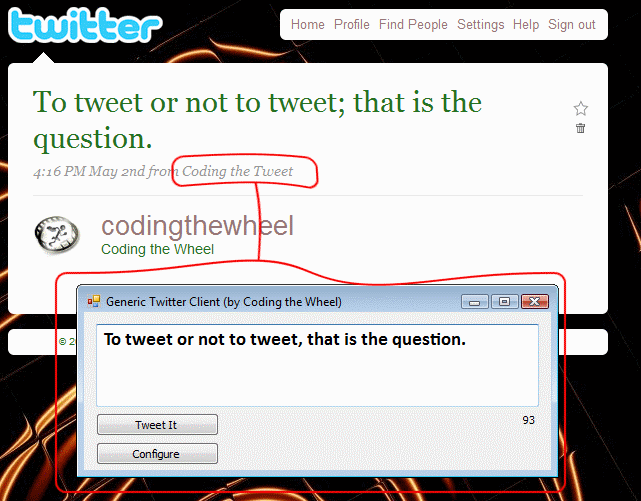 Since then, there have been some breaking changes in the Twitter oAuth implementation, including a new PIN-based authorization mechanism for desktop Twitter clients. If you’ve been getting 401 Unauthorized errors, this is probably why.

So I updated the Coding the Tweet generic Twitter application and the accompanying source code to support the PIN-based paradigm. The changes were minor:

Some Twitter developers have complained that these changes (the changes to the Twitter API) break existing code, and I agree, it’s always fun to rant about the people who write APIs for public consumption…always…but honestly the only difference here (for desktop Twitter anyway) is that the user PIN, once collected, needs to be packaged along in the call to oauth/access_token:

This only needs to happen once. Otherwise the workflow for user-authorizing a desktop Twitter application looks pretty much like it always has.

The code is still using Eran Sandler and Shannon Whitley’s oAuth/Twitter library but with additional changes to support the new PIN mechanism. If you have visions of .NET Twitter clients dancing through your head, save yourself some typing and use this library or something like it.

Otherwise the non-programmers out there can still download the Coding the Tweet application and copy/paste their Consumer Keys, Consumer Secrets, and (when prompted) their PINs via the Settings dialog. No coding required. 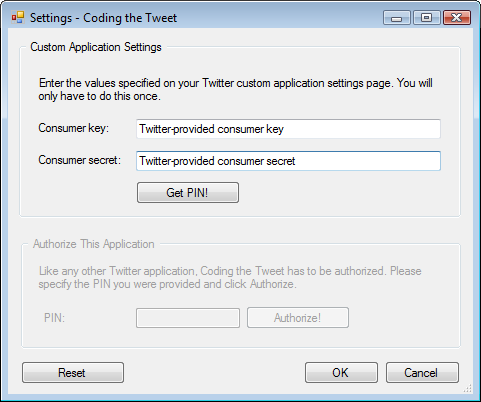 Questions? Bugs? You know what to do…